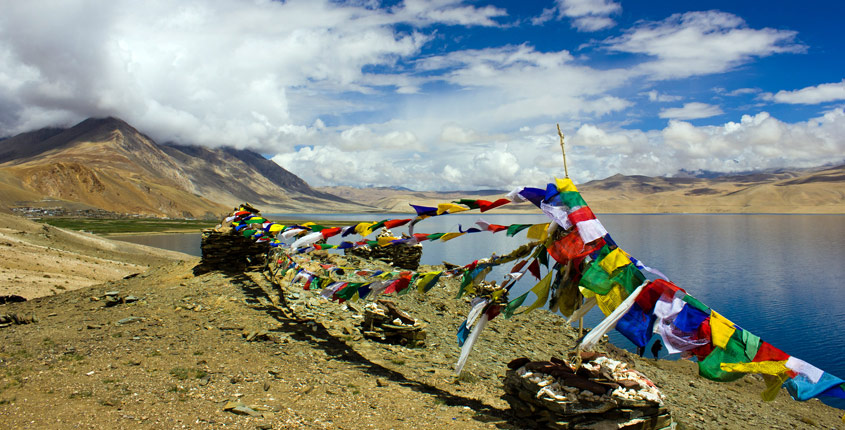 One has to see Ladakh’s beauty to experience it. Another example of Ladakh’s mesmerizing beauty is Tsomoriri Lake. Located in the Changthang region of Ladakh, it’s the largest high altitude lake in India. The lake is about 7 km wide and almost 19km long and is a part of the Ramsar site. It is also known as Tso Moriri Wetland Conservation Reserve, and lays claim to being the highest Ramsar site in the world.

The Tso Moriri Lake is dressed in shades of blue, with the images of playfully shaped clouds reflected in its pristine waters. It’s only when you come across sights such as these that you wonder about the beauty of nature which is infinite.

Here is everything you need to know about Tsomoriri Lake

Just like the high-altitude passes, adventurous and challenging roads, and panoramic beauty; Ladakh has another exciting place to offer its utmost beauty and that’s the high-altitude lakes. The number of lakes in Leh- Ladakh is quite extensive but the popular ones are just a handful of them. Offering more than just beauty is the Tsomoriri Lake that is located in the Changthang Valley.

Some amazing facts about Tsomoriri Lake

Being one of the finest lakes in all of India, a lot of tourists get attracted to the lake. Here is what makes this high-altitude freshwater lake an amazing place for travelers:

The best time to visit Tso Moriri Lake is between May and August. Though the lake is accessible throughout the year because the internal circuit of Ladakh is open all year long. But most of the visitors that are adventurers come here during these months on a road trip.

Distance of Tso Moriri from some important places of Ladakh

Places to visit around Tsomoriri Lake

Though Tso Moriri itself is an amazing attraction, it still has a few other attractions nearby that cannot be missed on your visit here.

Amongst all the other things to do around Tso Moriri birdwatching is something that people enjoy the most.

How to reach Tsomoriri Lake

Route from Leh to Tso Moriri

The route from Leh to Tso Moriri Lake is the most preferred route by visitors to this enchanting lake. This route takes around six to seven hours depending on the times you take a break in your journey. This route covers famous monastries of Leh Ladakh including Thiksey, Hemis and Shey monasteries. It also boasts the best road conditions.

However, if you are short on time, then you can exit towards Manali-Leh highway from Tso Moriri through this route. To know more click here!

The direct route to Tso Moriri from Pangong Tso goes through the remote and amazing Changthang region. The route takes you past the most incredible sceneries you will come across in the Ladakh region. However, foreigners taking this route cannot go beyond Man-Merak village as they don’t have the required permits for this route. They will have to take the indirect and longer route to Tso Moriri from Pangong Tso.

Always remember to carry enough fuel for about 550 - 600 km because you will not come across any petrol pump on the route covering Leh – Pangong Tso – Nyoma – Loma – Tso Moriri – Leh.

The indirect route is also the longer route, and it goes through Chumathang. On this route, you need to go all the way to Pangong Tso to Leh upto Karu. Upon reaching there, you can take a left towards Upshi – Chumathang – Korzok to reach the Tso Moriri Lake. Foreign tourists who are denied permits for Changthang region can take this route, if they don’t want to go back to Leh. However, one must go back to Leh from Pangong Tso to relax and refresh themselves before starting towards Tso Moriri the next morning. To know more about Pangong lake to Tso Moriri click here!

The road conditions entirely depend on the route you are taking. The best road however, is the route from Leh to Tso Moriri Lake. When it comes to the kind of vehicles in Leh Ladakh, however, the best option is to go for an SUV. The roads in Leh Ladakh are full of twists and turns, and the SUV’s are best suited for this purpose.

People who visit here love spending as much time as they want around the lake and most of them spend at least a night. If you are planning on a night stay around Tso Moriri then you should be well aware of options. There are camp colonies and a few hotels on the premises though, but if you want to know all your options, here is the link to it!

Certain areas in Leh Ladakh require domestic visitors to obtain an Inner Line Permit (ILP). Visiting Tso Moriri also requires you to obtain an ILP. Foreigners visiting Leh Ladakh are required to obtain a Protected Area Permit (POP). Visitors are required to pay an environmental fee of Rs. 400 and an Inner Line Permit Fee of Rs. 20 per day per person to obtain this permit. The inner line permits are available from the website www.lahdclehpermit.in. It should also be noted that the permits are not needed for travelling on Manali-Leh highway, Srinagar-Leh highway or Zanskar Valley.

You will not find any mobile network at Tso Moriri Lake, but who needs it anyway when you have a slice of heaven staring at you. Leave all your worldly needs behind you and lose yourself in the beauty of the surroundings. That’s what counts! To know more about availibity of Mobile network click here!