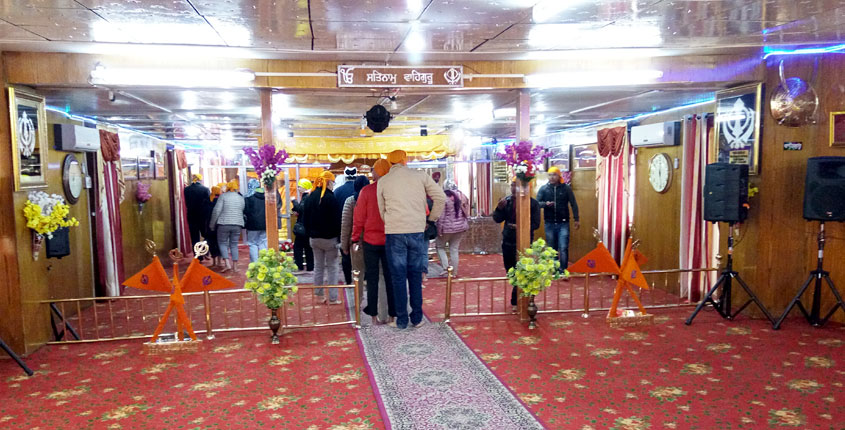 Gurudwara Pathar Sahib is a highly revered gem located 25 miles away from Leh town on Kargil Leh Highway. Devoted to Guru Nanak Devi Ji, the founder of Sikh Religion, the sacred place beautifully commemorate his visit to Ladakh. Dating back to 1517, the Gurudwara houses a boulder with imprints of the head, shoulders and backside of Shree Guru Nanak Dev.
Not only the Sikh and Hindu devotees but Tibetans also bow down with full devotion at the Pathar Sahib Gurudwara. The latter worship the presiding deity here as Lama Nanak or Guru Gompa Maharaj. A legend is associated with the place and makes it a famous pilgrimage spot for the people visiting Leh- Ladakh.

History of the Gurudwara Pathar Sahib

On flipping the pages of History, it can be found that Guru Nanak Dev marked his presence here in 1517-18. Upon his onward journey to Punjab via Srinagar, after visiting Sikkim, Nepal and Tibet, the holy soul decided to take rest at this place.

However, as per the folklore, the stay of Guru Nanak Dev Ji was not so easy. A cruel demon existed on the opposite hill and used to frighten the people. He was infamous for eating people after killing them. Thus, the natives pleaded to the almighty for help. Upon hearing their plights, the revered saint decided to help them. Eventually, he settled down on the bank of the river below the hill where the unkind creature dwelled. The first Sikh Guru started delivering sermons to people and hence became popular. This increased the rage of the demon and he decided to kill Guru Nanak Dev.

In order to fulfill his plans, he threw a huge rock on the respected Guru who was meditating at the foothills. But as they say, ‘Jako Rakhe Saiyan, Maar Sake Na Koi’, and when the person in question is God himself, miracles are obvious! Baba Nanak was not harmed even an inch as the rock transformed like molten wax and took his shape. This rendered the demon in an utter state of shock. Instigated with anger, the devil again tried to implement his plan. This time he made an attempt to kick the rock with all his strength. Again, a miracle took place. The foot of the ‘rakshasa’ got imprinted on the molten stone. Acknowledging the powers and the immortality of the Guru Nanak Dev Ji, the demon stopped troubling him and the natives. Later, Lord Nanak returned and this event was forgotten for over a long haul.

Rebirth of the Gurudwara Pathar Sahib

It was in the late 1970s that the holy boulder came into the picture again during the construction of the Leh-Nimu Road. Because of this, the construction work was paused and painstaking efforts were made to move the rock. Even bulldozers were incorporated to pave the way by removing the huge stone. However, everything went in vain. That night people including the driver of the bulldozer had envisioned of a supreme power ordering them not to move the boulder. The entire incident was brought into the attention of the army officers who didn’t pay any heed to it. They apparently decided to blow the rock.

To the surprise of the army officer, he also had the same dream of not to move the rock. Ignoring the dream he started working for the same the next morning. But, this time, he along with other workers were confronted with several Ladakhis and Lamas. They narrated the entire incident of Guru Nanak Dev Ji and unveiled the mystery behind the sacred rock. Later, a Gurudwara was built over there with the help of locals, army officials and Lamas. The holy site came to be known as Pathar Sahib Gurudwara, one of the best Sikh places of worship. Since then, the pilgrimage site that shelters the boulder is worshipped by both the Sikh Sangat and local Lamas. The Indian Army is continuously making efforts to maintain the shrine from the day it was constructed.

The Pathar Sahib Gurudwara outstands amongst rest of the Sikh gurudwaras. The sacred shrine remains open from 6:00 am to 7:00 pm, all the days of the week.

How to Reach Pathar Sahib Gurudwara from Leh?

Upon reaching Leh, one can take the taxi to cover a distance of 25 km from the road which is in good condition.

Activities to do at Gurudwara Pathar Sahib

Nearby attractions to Gurudwara Pathar Sahib

Besides basking in the bliss at the Gurudwara Pathar Sahib, one can also plan to explore some of the attractions nearby.

Heavy snowfall from November to May blocks the roads in Srinagar and Manali leading to Ladakh. Therefore, if one still wishes to visit Gurudwara during this time, traveling via air is the only option to reach Leh.
Hence, the best time to visit Gurudwara Pathar Sahib is from May to October when the roads to Leh Ladakh are open.

Consult your doctor before embarking on a pilgrimage to the holy site.

Since the place is a holy place, dress appropriately and cover your head before entering in the Gurudwara.

It gets unbearably cold during the winter season. Thus, make sure that you get acclimatized well in advance. Carry all the necessary essentials with you.

Return to Leh by the evening.