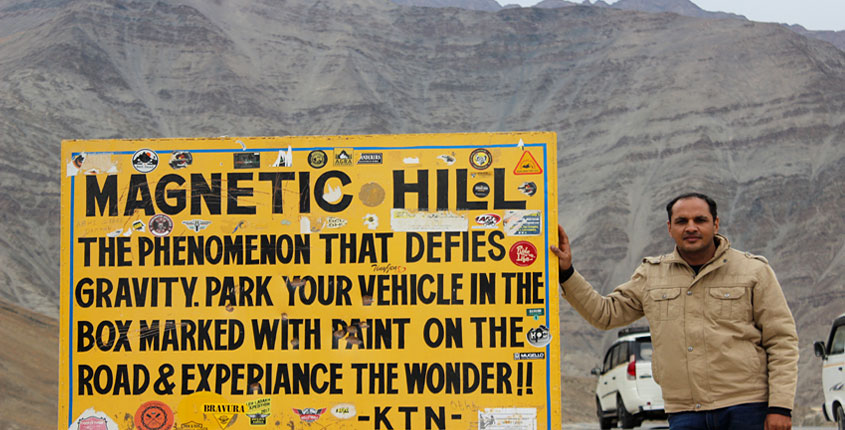 Magnetic Hill is one of the best and most visited attractions of Ladakh. It is a mysterious place that defies the laws of gravity. Here, when you park your vehicle or put your vehicle on neutral; it still runs at a constant speed of 10-15 kmph, that too up the hill. This is a phenomenon that has stirred a lot of scientists.

This phenomenon is a sensation that has stirred a lot of people and has lured them towards itself. There are many theories and facts that people have told behind this wonderful phenomenon but whatever it might be; one this is for sure and that’s amusement. You can stop by at this point and capture some videos.

Click pictures or take some rest at such a serene place. Several people do consider Magnetic Hills to be a gravity-defying place but a lot of others take this as a scientific phenomenon. Whatever be the reason, we will be finding it out below. Irrespective of all this, Magnetic Hills has always been a top-notch attraction luring travelers visiting here.

Important things you should know about Magnetic Hill in Leh

The myth about Magnetic Hill

The villagers have a myth about this place where they think that there was a time in the past when a road at Magnetic Hill existed. This road took people to heaven. Those people who deserved heaven were pulled up while walking on this path whereas those who didn’t deserve the place didn’t feel anything.

How To Reach Magnetic Hill

Magnetic Hill is located at an altitude of 14,000 ft above sea level on National Highway 1. This attraction falls on the Srinagar- Leh highway. If you reach Leh by air or from Manali, you can either take a bus or a taxi to reach here.

Where are Magnetic Hills located?

Magnetic Hills are located approximately 27 km from Leh city on the Kargil- Leh highway. If time allows, people taking road trips visit here on their way to Leh city, rest do that on their way back. This attraction is located at an altitude of 14000 ft. near the Sangam.

This is a landscape and can be visited 24*7. But if you want to enjoy the mesmerizing beauty of the place and do the gravity-defying drive, you will have to come here between 8 am and 5 pm. You will get to see people flocking the area and between these hours to enjoy the quad-bike ride up the hill.

What is the best time to visit Magnetic Hills?

The best time to visit Magnetic hills is between June and September. This is the ideal time when travelers visit here on road trips and the weather remains beautiful.

What are the popular theories related to Magnetic hills?

The superstition of the locals

The Ladakhis are superstitious regarding the Magnetic Hills and they believe the reason why things go uphill in this place is because it is a gateway to heaven. They believe those who are worthy are pulled by God to heaven.

A lot of scientists and people believe that there is a strong magnetic force present where Magnetic Hills exist. It is also believed that even airplanes don’t fly over this region because it causes a lot of magnetic disturbances.

The theory of illusion

Last but not the least comes the optical illusion theory. According to this theory, people believe that Magnetic Hills is a downfall instead of an uphill. It is an optical illusion where people can see that the vehicles go uphill.

Whatever the reason, if you are visiting Ladakh, do not forget or skip visiting Magnetic Hills.

What are the places around Magnetic Hills?

While you visit the confusing yet amazing Magnetic Hills there are a few other places at its proximity that can be visited too. Here are some of the best places to visit around Magnetic Hills:

FAQs About the Magnetic Hills Ladakh

Ans: The distance between Leh and Magnetic hills is approximately 27 km.

Ans: Yes, Magnetic Hill is an optical illusion because what looks like a climb up the hill is actually a downhill where cars move at a steady speed even when you are not pressing the acceleration.

Ans: Magnetic Hill is located in the Leh district of Ladakh and is one of the major attractions of the city. While traveling to Leh on the National Highway 1, Magnetic Hill comes through. It is covered by barren mountains on all sides and Sindhu River flows on the East.