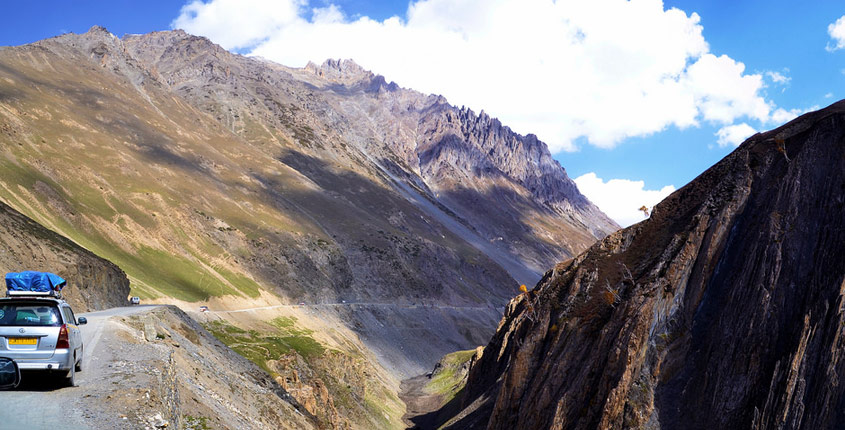 When it comes to high-altitude passes and dangerous roads, Ladakh in India is the name that pops up in our heads. And those who know about the roads of Ladakh think about the ZojiLa pass. Around 3528 m (11, 649 ft) above sea level, the pass separates the Kashmir Valley from Drass Valley. It lies 9 km away from Sonamarg and is an important link between Ladakh and Kashmir. Nestled on National Highway 1 between Srinagar and Leh, this pass is considered to be the second-highest pass after Fotu La on the Srinagar-Leh National Highway.

ZojiLa pass is a very important pass connecting Srinagar Valley with the Suru and Drass Valley as well as the Indus Region. This notorious dirt trail offers a spectacular view of the valley and gives a daunting trail to ride on with hairpin bends making it even more daunting. Once you reach ZojiLa, you are going to savor an amazing view of the mighty Himalayan mountains, which makes the ride worth it. ZojiLa pass remains disconnected from the rest of the world for almost six months in a year. This 434 km long highway stretch is the lifeline of Ladakh. After the Kargil war in 1999, the government paced up the construction of the road due to its strategic importance.

Everything you need to know about Zojila Pass before visiting

Some Amazing facts about Zojila Pass

History of the adventurous Zojila Pass

At the time of the Indo-Pakistani War in 1947, this pass was seized by the Pakistani raiders in 1948 while they were in the wake of capturing Ladakh. Later on 1st November, the Zoji pass was captured by Indian forces under Operation Bison.

When is Zojila Pass opened and closed?

ZojiLa pass mostly remains closed during the winter due to heavy snowfall. But the Border Roads Organization (BRO) works day and night for smooth flow traffic throughout the year. The Beacon Force is that unit of the BRO, which takes care of clearing and maintaining the road during the winter season.

The best time to visit Zojila Pass is between June and early October. From mid-October till April, this route remains closed due to heavy snowfall. Also, if you plan on visiting here in August, keep in mind that you might have to wait for long hours due to the landslide problems.

Requirement of a permit for Zojila Pass

You don’t have to worry about this because to visit Zojila Pass, you need no permit. In fact, recently Leh-Ladakh tourism has lifted the need for permits even in the restricted/protected areas of Leh-Ladakh.

Will there be snow in Zojila?

Rest assured that even if you visit the Zojila pass in June when the entire country experiences an extremely hot climate, you will still find snow here.