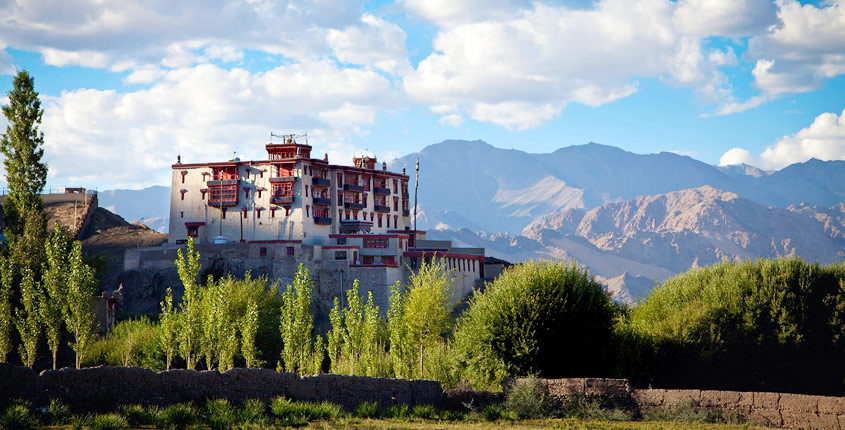 Stok Palace is one of the finest attractions of Leh and probably one of the most visited too. Which was once home to the king of Ladakh is now converted into a heritage hotel. It won’t be wrong to say that Stok Palace is the perfect reflection of the glorious past of Namgyal’s reign in Ladakh. It is believed that the palace was also the summer home of King Sengge Namgyal and his descendants. The palace was established by King Tsepal Namgyal back in 1820 and then it was opened by the Dalai Lama in 1980 for public visits.

There is also a museum that is located in the Stok Palace. Additionally, there is a temple too. The rooms and other attractions inside the Stok Palace are rustic but charming. The quirky decoration of the place is so well-done that you enjoy your time throughout the stay. All-in-all, Stok Palace is a traditional attraction that is very important for the people of Ladakh.

Stok Palace that’s now converted into a heritage hotel was built by King Tsespal Tondup Namgyal in 1820. He was one of the mighty rulers of the Namgyal dynasty and Ladakh. The palace was visited by the Dalai Lama back in 1980 after which it was opened to the common public.

Stok Palace, when opened for the common public, was segmented into different layers. The entire palace was divided into various sections which can be seen when you visit here. Here is what all is offered in Stok Palace Ladakh

One of the sections is still left as the palace area where people can go and see the items used by the previous kings. It is one of the best-preserved traditional attractions of Ladakh. You can also visit here to have a look at different things kept in the palace.

Another section of the palace is converted into a museum. A considerable amount of area comes under the Stok Palace Museum. Here, you will get to see some amazing and precious jewels and artifacts of King Sengge Namgyal and his descendants. A lot of history buffs find their piece in exploring the museum and amusing themselves throughout that period.

One can also find a collection of royal paintings and photographs some of which are more than 400 years old.

The major section of Stok Palace is converted into a hotel and that’s the star section of the entire palace. The quirky design and rustic color make this heritage hotel a wonderful place to stay for a couple of nights. Not only do you get the chance to enjoy a great outside view but so much more than that. The Heritage Hotel is constructed as a 4-story building with a lot of colorful spaces across the building. If you choose to stay here, the breathtaking view of the Indus River will leave you in a spell-bound state.

The other section of Stok Palace is the Stok Palace Temple which is more of an extension of the palace. It is a part of the Stok Palace Heritage Hotel. The temple is dedicated to Lord Buddha and is located at the topmost level of the palace. Apart from the regular rituals and prayers, there are annual events and festivals that are celebrated here.

Stok Palace is approximately 15 km from Leh and is easily accessible. You can take a bus or hire a cab to reach here. It takes approximately 45 minutes from Leh city to reach the palace vicinity.

Although the timings to visit the Stok Palace is none because it is a part of the heritage property, if you want to access the museum there is a timing and charges.

FAQs about the Stok Palace Ladakh

Ans: Reaching Stok Palace is not going to pose any problems because all you need to do is take a bus or hire a cab and within 45 minutes you will be at your destination. If you have your vehicle, it will be even quicker.

Ans: The major attraction in Stok Palace is the heritage hotel that offers you some amazingly appointed rooms and a breathtaking view of the Indus River. Apart from this, if you are a history buff, you will also love exploring the Stok Museum.