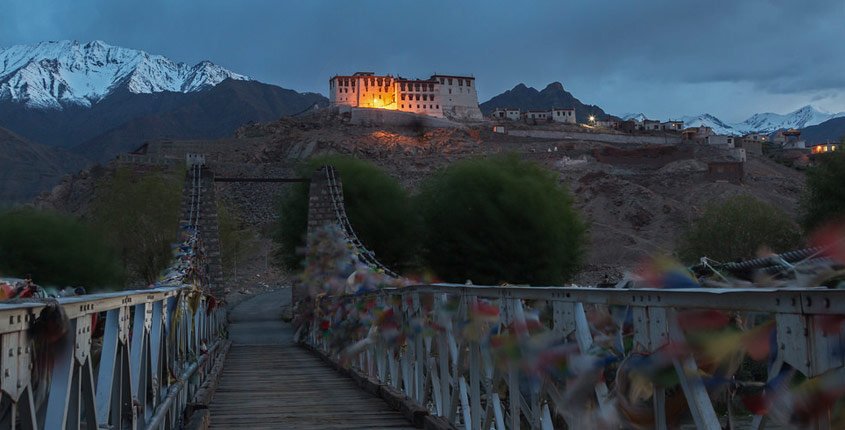 Stakna Monastery was built by the Bhutanese saint and scholar, Chosje Jamyang Palkar, in the 16th century. Occupying the central position of the monastery is the marvelous marble statue of Avalokitesvara, believed to have been brought over from Assam.

There are several attractions inside the monastery. As a tourist, you will have numerous opportunities for exploration. Inside the monastery is a huge assembly hall called Dukhang which is decorated with incredible paintings of Sakyamuni, Tsephakmad and Amchi. The Stakna Monastery also houses several idols which are as elegant as they are enchanting. Head to the extreme right hand side of the courtyard though, and you will come across a 7ft tall silver gilded chorten consisting of a figure of Lord Buddha with some notes. Parallel to the hall are paintings of various Buddhist gurus including Bodhisattva, Tshong-san-Gompa, and Padma Sambhava. On the top of the monastery, you will come across gorgeous views of the Indus River.

Thiksey Monastery lies at a distance of almost 8km from Stakna Monastery and is the one of the largest monasteries in Ladakh. It consists of 12 stories, 10 shrines and an assembly hall. Thiksey Monastery is also referred to as “mini-Potala” because of its resemblance to the Potala Palace in Lhasa, Tibet.

Hemis Monastery lies at a distance of almost 17km from Stakna Monastery. It is counted among the most iconic monasteries in Ladakh and is famous for the hosting the annual Hemis Festival. The special attractions inside the monastery are the copper gilded statue of Lord Buddha and an enormous statue of Guru Rimpoche.

Shey Monastery is located almost 11km from Stakna Monastery, and is one of the most popular monasteries in Ladakh. The monastery is situated inside the premises of Shey Palace which was once the summer retreat of the royal family of Ladakh.

Druk White Lotus School, famously known as Rancho School, gained popularity after being featured in the Aamir Khan’s movie 3 Idiots. Upon arriving at the school, you will be given a tour of the campus with a guide. You will visit the different parts of the school which were shown in the movie. Its interesting to know that this school has been designed in a way to withstand seismic disturbances.

The best time for visiting the Stakna Monastery is from July to September. This is the time when the roads are clear and you won’t face any difficulties while exploring the monastery.