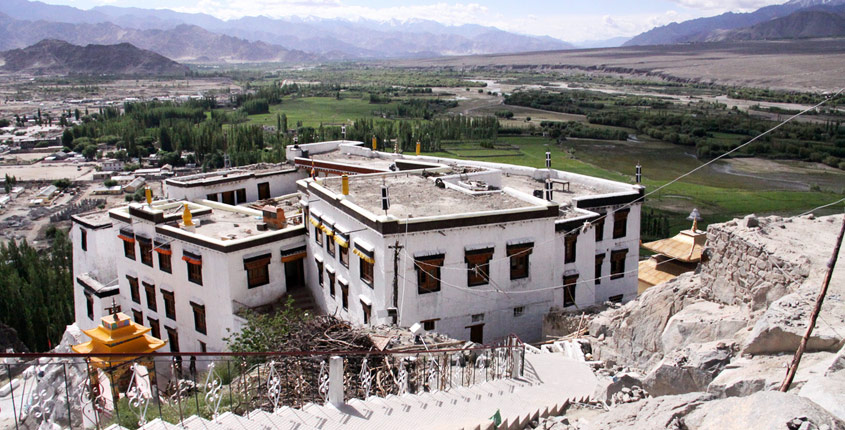 Spituk Monastery, built during the 11th century, also known as Pethup Gompa, was founded by Od-de, the elder brother of Lha Lama Changchub. Today, it is home to 100 monks as well as a giant statue of goddess Kali, which is shown to the public during the yearly Spituk festival. Although founded in the form of a Red Hat institution, it was taken over by the Yellow Hat sect during the 15th century.

Every year, this three-chapel monastery, located 8 km away from the main city of Leh, plays host to the Gustor Festival, held at Spituk during the eleventh month of the Tibetan calendar.

Here is some key information that you as a traveler should know before visiting Spituk Gompa:

Is there any entry fee for Spituk Gompa?

Every traveler has to pay 30 INR as the entry fee on visiting Spituk Gompa.

What is the timing of Spituk Gompa?

What are the highlights of Spituk Gompa?

A few highlights of Spituk Gompa are:

How to reach Spituk Gompa

Spituk Gompa is just 8 km away from Leh and taking a bike trip, cab, or taxi to the monastery is the best way to reach here. If you are an adventure junkie and think of trekking this 8 km, you can do that as well.

What is the best time to visit Spituk Gompa?

Though you can visit the monastery throughout the year, the best time to visit Spituk Gompa is during January. On 29th and 30th January, the Annual Spituk Gustor Festival will be organized next year. This is one of the best festivals celebrated in Ladakh and being a part of this can be a once-in-a-lifetime thing.

What are the important festivals celebrated in Spituk Gompa?

The important festival celebrated in Spituk Gompa is the Annual Spituk Gustor Festival that will be celebrated on 29th and 30th January 2022 next time. This festival is celebrated on the 28th and 29th days of the 11th month according to the Tibetan Calendar.

Here are some popular attractions around Spituk Gompa: