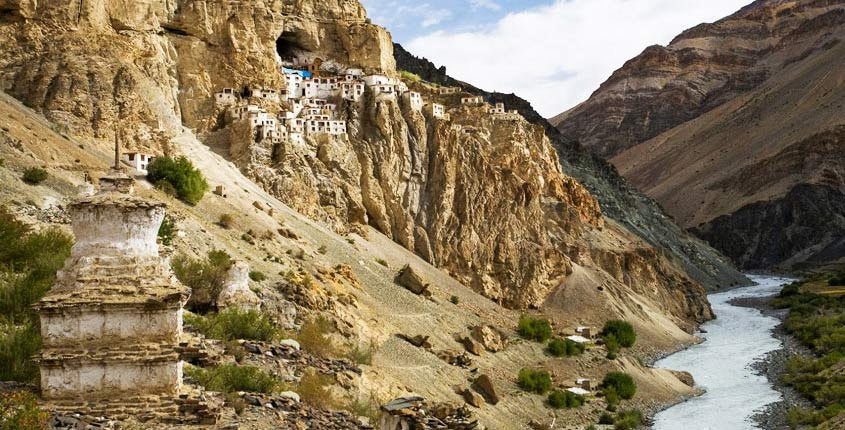 Phugtal Monastery in Ladakh, a legendary cave gompa is tucked amidst the remote and isolated town of Phuktal or Phugtal. Counted as one of the only Buddhist monasteries in Leh Ladakh that is accessible only by foot, the Phugtal monastery is nestled on the cliff-side next to the River Lungnak. Nearly 70 monks dwell at this monastery which is believed to have been founded by GangsemSherapSampo in 12th century.

The monastery has been a place for meditation, retreat, teaching and learning for ages. Phuk means ‘cave’ and tal means ‘at leisure’ or it’s another version goes as Phukthar where thar means ‘liberation’. Hence, the cave is called as the ‘cave of leisure’ or ‘cave of liberation’.

The current Phugtal Monastery was established in the 15th century by the Jangsem Sherap Zangpo during. This monastery is built around a natural cave and it is believed that the saint and scholars have visited this site since 2,550 years ago. This monastery is also known as ‘Cave Monastery’ or ‘Cave Gompa’. The name of the monastery is derived from the word Phuktal where Phuk means ‘cave’ and Tal or 'Thal' means ‘at leisure’.

An alternate spelling of the name is Phukthar, where Thar means ‘liberation'. The meaning of the name is ‘The cave of leisure Monastery’ or ‘The cave of liberation Monastery’. This monastery houses a main temple, library, prayer rooms, living quarters, and apartments along with the original cave and the sacred spring. Almost 70 monks reside in the monastery. This one of the most isolated monasteries of the region is made up of wood and mud.

Phugtal Monastery belongs to the Gelug school of Tibetan Buddhism, where a large number of festivals are celebrated with great zeal and vigor. You can get a glimpse of the rich cultural heritage of the region during the festivities. The festivals in the Phugtal Monastery start around the end of February, depending on the Tibetan Calendar. During the festivals, the monks interact with the locals, and villagers go to the monastery. They offer prayers and worship. Some of the important festivals celebrated in Phugtal Gompa are

This festival is also known as Monlam Chenmo, which means 'great prayer' in Tibetan. It is the most important Tibetan Buddhist celebration of the year, which signifies the start of the New Year. It falls during the end of February or at the beginning of March.

This festival is held right after the Smonlam Chenmo and it is held to worship thirteen special deities.

This is a harvest ceremony, which is celebrated after Chudsum Chodpa. For this unique festival, monks create a special torma, which is a statue made of barley flour and butter and is worshipped by villagers.

This festival is celebrated with great zeal and during the celebration, the locals and monks perform puja for the long life of the 14th Dalai Lama.

During this festival, the locals do penance to purify themselves of all sin and to acquire good karma. It is celebrated after mid-June.

Also known as the Varshavas Ceremony, Yarnas is a special festival of Phugtal Monastery during which the monks remain confined within the monastery and perform special daily pujas to avoid and make good the negative karma accumulated from treading upon plants, insects, and microorganisms. It is held between the end of July to mid-September, and visitors need to obtain special permission from the Head Lama of the monastery to attend a short portion of the Yarnas.

This is a lightning ceremony, which is held during the beginning of December to mark the death anniversary of Je Tsongkhapa, the founder of the Gelug branch of Tibetan Buddhism.

This is one of the most important festivals that are celebrated at Phugtal Gompa. This festival is held at the end of February and before the Smonlam Chenmo.

What is the Best Time to Visit Phugtal Monastery

Phugtal Monastery can be visited during the summer season when it is easily accessible. The best time to visit Phugtal Monastery is from June to September when the region experiences comfortable weather and the rest of the year the roads and trails are covered with snow. During the festivities, you can visit there to sneak peek into the lifestyle of locals, learn about the vibrant culture of the region. You can interact with locals and monks and listen to the local folklores.

Where to Stay around Phugtal Monastery

How to Reach Phuktal Monastery

Phuktal monastery is only accessible only on foot. The nearest major town from the monastery is Padum, which is also the administrative center in Zanskar. From there, you need to cover 30 km of distance till Ichar, also called Lchar by road. The road ends here and from there you can trek to the Gompa. You can hire a taxi, drive your own car, or ride a bike till there only and after you need to cover the rest of the distance by foot.

What Are the Important Travel Tips to Know Before Going to Phuktal Monastery?