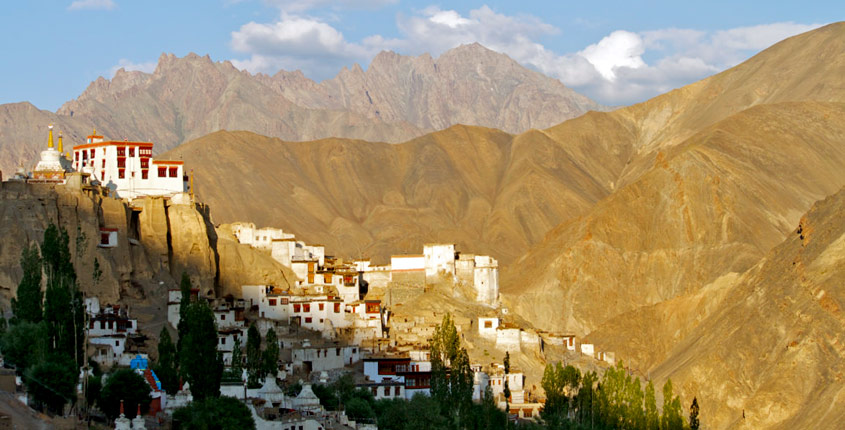 Nestled in Lamayouro, Yuru or the Lamayuru Monastery is a Tibetan Buddhist Monastery. Perched at an altitude of 11520 ft., the monastery is one of the fascinating places to visit in Ladakh. The oldest gompa is also one of the largest monasteries in Ladakh famed as Tharpa Ling which means the ‘place of freedom’. Nearly 150 monks belong to the monastery and 30-40 still reside at the gompa belonging to the Red-Sect of Buddhism. The monastery lures spirituality learners and tourists who wish to spend some time at a beautiful location amidst the sacred aura. The gompa also serves as the meditation center. Tranquil ambiance and scenic location of the monastery is mesmerizing.

Lamayuru is the oldest and one of the largest monasteries in Ladakh. As per legends, Lamayuru's valley was a clear lake at the time of the Sakyamuni. The lake was the dwelling place of the holy serpents. The Bodhisattva Madhyantaka made a prediction that the lake will be emptied and a monastery will be built here. Naropa, a Buddhist scholar visited Ladakh in 11th century and spent many years meditating in a cave. Naropa then caused a split in the surrounding hillside and due to this the lake emptied. Thereafter, Naropa found a dead lion covered by the waters of the lake. Naropa built the first temple on this spot and named it as the Singhe Ghang (Lion Mound).

Another historical account states that the King of Ladakh ordered the construction of Lamayuru in the 10th century and kept it under the supervision of Rinchen Zangbo. There were five buildings in the original gompa, although only the central one still stands.

In 16th century, Jamyang Namgyal, the then king of Ladakh was cured of leprosy by a monk from Tibet. Thus, the King bestowed the gompa to this lama. Some other benefits were also given such as the area surrounding the monastery was declared a sanctuary where none could be arrested and no taxes were collected. It is due to this, Lamayuru is still considered as the Tharpa Ling, the "Place of Freedom".

A number of attractions are worth witnessing in the Lamayuru Monastery.

All the lamas gather for prayers at the monastery twice a year, accompanied by three days of masked dancing. These get-togethers are conducted in the second and fifth months of the Tibetan calendar (corresponding usually to March and July). Yuru Kabgyat Festival lures many lamas from Tibet, Japan, Korea and China and brings life to the monastery.

The nearby attractions to the Lamayuru Monastery are Wanla Gompa - a sub-monastery of Lamayuru, Uleytokpo – ideal place to spend holidays amidst tranquil environment and MoonLand – a peculiar landscape near Lamayuru.

April to June is the best time to visit Lamayuru Monastery.

Ladakh Trip With Siachen By Air

₹24,800 Per Person
Explore
View All Packages
Plan Your Trip!
Plan your perfect holiday to the wonderland of India with our travel experts.
Help Me Plan My Trip