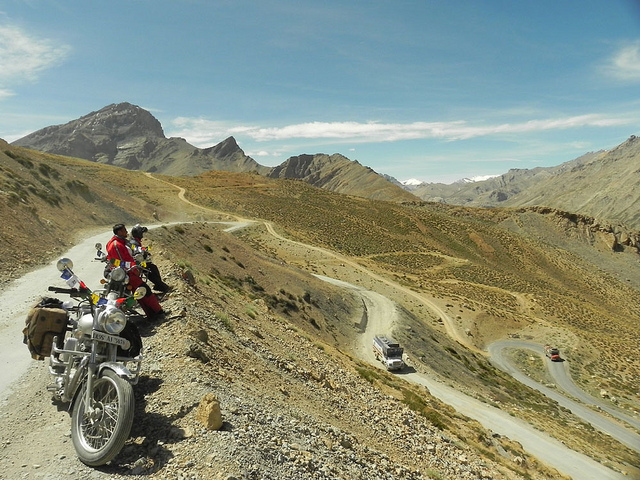 Recently I ( Sandeep Manral ) met with Nikhil Chandra, who did a bike trip to Ladakh region recently in past months. As I am also associated with this region, so I took this opportunity to ask him about his  trip to Ladakh. Here are some important point of our conversation :

Q 1 – How was your experience during Ladakh tip?

Could it be described in a word? No I guess not 🙂 In humble words though, it was an awesome experience. Riding along the barren landscape, crossing high altitude mountain passes, getting stuck in the violent water stream flowing on Baralacka La, feeling sublime at Taglang La and crossing awe inspiring Morey Plane…It can’t get more adventurous or exciting. It was a ride of a lifetime and will remain one of my favorite bike trip.

Q2 – At what point did you start enjoying being on the road? What were some of your aha moments?

It was when we rode from Vashist – Manali – that the scenery began to change. After crossing Mandi early morning, the scenery was ethereal with clouds floating above and even beneath us as we rode. Arriving at Rohtang Pass was a dream come true. At the top watching the distant cotton wool peaks of Pir Panjal Range of Himalayas was a magical experience. Again driving on the road towards Darcha from Keylong with mountain on one side and rolling valleys and river on the other was like playing MOTO GP as I did when I was a child -No no I didn’t ride in MOTO GP, I am talking about the video game that I played 🙂

The aha moment was at the top of GATA Loops when the 22 loops conjured a mesmerizing sight. There were off roading tracks too but alas we were on motorbike so couldn’t afford to take them. Another wow moment was crossing Baralacha La. The top of the pass had a magical view with vast stretches of snow all around. Then there was Taglang La, which according to the signboard of BRO is the second highest motorable pass in the world – believe me it is not.

After reaching Leh, another aha moment came when we were crossing Chang La en route Pangong Tso. It was one of the most awe inspiring passes that I crossed during my road trip to Ladakh. But the aha-est moment arrived when I caught the first glimpse of Pangong Lake. After riding so long surrounded by barren landscape of Ladakh, beholding the sight of the turquoise water of Pangong from far is indescribable. It could only be felt. You gotta be riding there to know how aha that sight was.

Q 2 – What would you like to recommend before visiting to Ladakh?

If you are also visiting Pangong Tso or Tso Moriri which are well above 14000 feet, you should mind acclimatization seriously. Keep Diamox with you and take advice from your doctor on the dosage. Don’t drink too much water or alcohol. Don’t run in excitement on mountain passes which – believe me when I say – is irresistible. Take it easy and if you don’t feel well or feel dizziness or headache, descend quickly. Keep warm clothes with you and 2-3 pairs of thermocoats/inners and 2 jackets atleast. Sunscreen, hat and sun glasses are also some of the essentials that you should carry on your visit to high altitude terrain of Ladakh.

Q3 – Top 5 Palaces that would you like to recommend?

Well that’s very easy. It’s gotta be Pangong Tso, Tso Moriri, Hunder, Lamayuru and Zanskar. But believe me when I say that Ladakh in itself is the top place. Everywhere you stay and halt and stop to catch breath is equally mesmerizing. It’s not just about the lake at Panhong & Korzok or the desert and camel ride at Hunder, it’s about everything that is Ladakh. There’s the awe inspiring landscape, friendly people greeting you with jooley as you pass by or the stunning monasteries, Ladakh is a complete package which you enjoy in its entirety.

Q4 –  How was accommodation facilities there?

Accommodation depends upon your preference. Traveling as I was with 2 friends of mine, our main concern was shelter instead of luxury. In Leh, you could get basic accommodation starting from INR 1000 which could go as high as INR 4000 depending upon the facilities and purpose of your visit. We payed 1000 for 3 in Leh and dumped our baggages there for a week then travelled to other destinations in Ladakh. In Pangong, Hunder, Nubra, Spangmik, Korzok etc. accommodation is as cheap as 700 for 3 in a Homestay and up to 3000-4000 in luxury tents. So its totally upto you how much are you willing to pay.

And belive me when I say that Homestays are warm enough but you wont get running hot water or attached toilet as is available in high end luxury tents. And anyways, hotels are not available in Pangong, Tso Morriri, Hunder etc.

Q5 – How long trip would you like to recommend for Ladakh?

Ladakh could take you months if you want to really explore and discover it. I had a road trip of 18 days and I feel that I didn’t even get to know the surface that is Ladakh. To explore it inner beauty, I am going to return and I seriously don’t know how many time. There I so many places which I noted down where I’d stay when I next visit Ladakh. I’d love to spend a night or two in Spangmik, Tangtse, Lamayuru, Mulbekh, Khaltse, Korzok and so many other places. It will take a lifetime but I am gonna do it. But if you are to explore the gem of destinations then I’d suggest that you plan for atleast 12 days which would ensure that you get to see Nubra Valley, Pangong Tso and Tso Moriri along with monasteries and other local attractions.

Q 6 – Did you face any difficulties during your trip?

Well I did. The first one was when we were crossing Rohtang La. There was too much mud and I saw quite a few bikes breaking down while negotiating it. But I somehow manged to cross the mud and so did rest of my two companions…after all we had Royal Enfields 🙂

The next heart thumping moment came while negotiating a vicious water stream on Baralacha La. One of our bike got stuck and I had to get down to help it cross the stream. The water was ice cold and I had to get off and get in at least 10 times before we managed to cross the bike. My feet, socks and boots got drenched and soon it got dark and I was feeling so much pain in the feet that we had to stop at the first camp that came during our descent.

Even as we coddled our self in the warm interiors of the tent, the headache struck. It was more than 15,000 feet and we hadn’t acclimatized for that after 2 in the morning it was unbearable pain and dizziness. Somehow the morning arrived but I was even unable to kick start my Royal Enfield. Somehow we helped each other and only after a few hour of descent when the altitude lowered that we felt normal. After that entire trip went hassle free as we had a tough lesson in acclimatization at Baralaha La.

You should indeed be in good health if you are planning a visit to Ladakh. The main issue while traveling to Ladakh is of acclimatization. Do spent a couple of nights in Leh before heading to higer altitude destinations like Pangong or Tso Moriri. If you are taking Manali – Leh route than I’d advise you to spend the night in Darcha instead of Sarchu which is 15000 feet and give you acclimatization troubles.

The best way to overcome the issue of acclimatization if you are traveling Ladakh by road is to follow the Srinagar – Leh highway which is relatively low when it comes to altitude. There are several high passes on Leh – Manali highway and even the night stay options are only available on high altitude places after Darcha.

Q8 –  Did you feel unsafe due to security reasons or other?

Ladakh is the safest place that I have visited till now and believe me I have travelled to quite a lot of places. It’s also the safest place to visit for woman traveling alone. In fact I saw quite a few lone female riders from overseas exploring several destinations in Ladakh. I met many bicyclers too. I met no rude police, rude and leering person or even a single tout during my entire trip to Ladakh. It was only when I arrived in Srinagar that I first caught the sight of touts.

Yes! There are so many plans I have and even for Ladakh. I just came back from a road trip to McLeodganj which was followed by a trek to Triund and Laka. I have a plan for road trip to Jaisalmer in December which would hopefully be followed by road trip to either Kathmandu or Bhutan in June-July.

And I also think that I am going to revisit Ladakh for the rest of my life. But next time it would be different. Instead of staying at known places, I’d love to stay at places which were relatively unknown yet fantastic to spend the night at.

Naming just 3 from countless of my dream places is quite a difficult ask. There are so many places where I have a dream to go. But since you asked for just three let it be the 3 which I am planning in recent years to come. It’s gotta be Ladakh which I have traveled to and would love to revisit again and again. Second would be Bhutan where I am also planning to go on a road trip in near future. The third where I want to ride in the near future is Nepal wherein I also want to go for trekking into upper reaches of Himalayas.

[If you want to book bike trip! Then visit Lehladakhindia.com]

Hemis National Park : Best To Explore The Wildlife In Ladakh
Ladakh Trip: A Tour Operator or on My Own (Q&A)